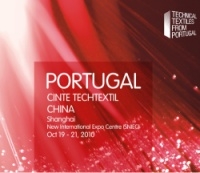 Partilhar
Print Send by email Back

Some of the main Portuguese producers of technical textiles are, for the first time, at Cinte Techtextil China, which takes place on October 19th to 21st in Shanghai. Artefita, Coltec and Segurvest show the most innovative products elaborated with the most recent techniques developed by the European industry in this area.

The technical and functional textiles industry is one of the biggest investment area of the textile and apparel industry in Portugal, and it is going to be showed for the first time at Cinte Techtextil China with the support of Associação Selectiva Moda and EU funds (Qren).

In this debut in Shanghai, Artefita exhibits its rigid and elastic webbings for several areas of application, with different finishings, such as aromatic, waterproof, oil repellent, anti-UV, anti-static and anti-bacteria. It also shows printing on the webbing, by silk screen or sublimation.

Coltec, on its side, shows its laminated and coated fabrics, among which breathable and waterproof fabrics, with incorporation of functional finishings such as clime regulation PCM, insect repellent, antimicrobial, fire retardant, hydrophobization, among others, for industries like footwear, apparel, automotive and construction.  «It is our first presence in China. We want to introduce our products in a market as vast as the Chinese, as well as to analyze what this country has to offer in terms of suppliers, raw materials and new products», reveals Francisco Fernandes, developer on the R&D department of the company.

Segurvest, on the other side, is at Cinte Techtextil China with its high visibility workwear, from vests until trousers and coats, designed to contribute to the safety of workers on public roads, as well as its products with flame retardant’s characteristics.

In this trip to China, Associação Selectiva Moda is also supporting the presence of Somelos Tecidos, a Portuguese company specialized in yarn dyed fabrics for high quality shirts that has as customers the most high-end European fashion houses, at the trade fair Intertextile Shanghai Apparel Fabrics, which takes place also in Shanghai, between October 19th to 22nd.